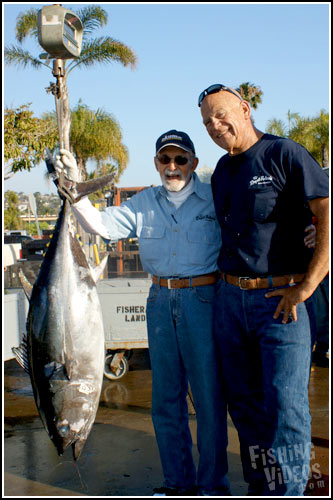 THE VERDICT WAS FIRST PLACE (071610)!!!! Royal Polaris ended her five-day trip at Fisherman's Landing July 16, after finding some excellent Yellowtail fishing at Cedros Island. The last day, noted skipper Frank LoPreste, was frustrating, as he fished hard all day in nearby waters for four Bluefin. He said water conditions there were poor and the fish unwilling.

Retired Monterey Superior Court Judge Harry Mauras of Pebble Beach won first place for his best Bluefin ever, a 72.2-pound Tuna that grabbed his sardine on 25-pound Izorline fluorocarbon and then took him around the boat a couple of trips during a 40-minute battle that was decided in his honor's favor.